August 30, 2020
Can domestic ARM CPUs shorten the gap with the frontiers of the industry? In this article, an inventory of existing ARM CPU products in the industry has been made. Unfortunately, this article missed an important enterprise of ARM server CPU: Ampere Computing. (Ampere is hardly used in China, so it was not added when comparing domestic and foreign ARM Server CPUs.) And just recently, Ampere updated its ARM CPU Roadmap, clarifying the next generation of ARM server CPUs that will be launched. The specifications and characteristics.
Ampere was founded by former Intel President Renee James and invested by The Carlyle Group. Ampere purchased AppliedMicro's X-Gene ARM-based server assets in early 2018 and began to provide eMAG series processors in October of the same year. The first-generation eMAG ARM processor is based on the X-Gene II platform and has been optimized. It adopts the ARM v8.0 architecture, uses TSMC 16nm process technology, has 32 cores, and runs at 3.3 GHz. Since Intel has been using HyperThreading technology (HyperThreading), eMAG 1 targets the 16-core Skylake Xeon-SP CPU. 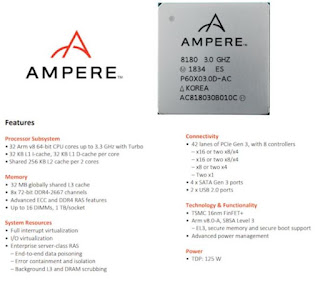 
Ampere's upcoming second-generation ARM Server CPU is not named eMAG 2, but is changed to Quicksilver. Like AWS's Graviton 2, this ARM CPU will use the ARM Neoverse N1 architecture platform and use the Ares core. On the basis of the ARM public version, Ampere will do some performance optimizations to use Ampere's own inter-Die interconnection communication technology. The target customers of this chip are multi-tenant cloud products and edge computing scenarios, and it does not limit its focus to enterprise customers and HPC application scenarios Ampere


The Quicksilver chip will use TSMC’s 7nm process technology, single Die structure, the number of cores will increase to 80 cores, provide 8 DDR channels, and support 1P and 2P server designs. The Quicksilver chip will use the CCIX interface for the interconnection between CPUs and the connection with peripherals such as GPU. This ARM CPU will also provide PCIe Gen4 IO channels, but the specific number is currently unknown.
Ampere did not mention the main frequency of the new generation of ARM CPU, but considering that the process is reduced from 16nm of eMAG 1 to 7nm, the main frequency of the chip will definitely be higher and is expected to be close to 4.0 GHz. Since Quicksilver's target market is edge computing and multi-tenant cloud scenarios, the power consumption of the chip will range from 45W to 200W, and the number of SKU cores will also be expanded from 10 cores to 80 cores, providing multiple types of options.
According to Ampere's introduction, the Quicksilver chip will provide samples at the end of 2019 and enter mass production in mid-2020. In addition, there are two other ARM Server CPUs on Ampere's Roadmap. One will continue to use the 7nm process, and the other will use the 5nm process. Taking into account the Roadmap of the Neoverse architecture announced by ARM at the beginning of this year, the next two Ampere ARM Server CPUs are most likely to be products using Zeus and Poseidon platforms. 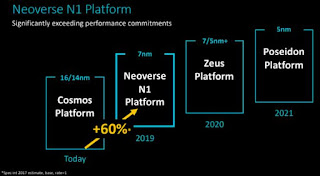 ARM announced its Neoverse architecture Roadmap for data center applications in early 2019, which undoubtedly provides a considerable boost to companies developing ARM Server CPUs. Whether at home or abroad, we can see the ARM CPU for server applications ushering in a development climax. According to the information from ARM and the Roadmap of various chip manufacturers, in the next 2-3 years, we will see various CPUs based on the ARM architecture being introduced to the market. Taking into account the rapid iterative pace of AMD EPYC x86 processors, the future data center market will change from the dullness of the past and become more exciting.