August 18, 2020
IBM's Power series is one of the few processors that are more powerful than x86. IBM announced the latest generation of Power10 series processors on August 17, designed to meet the needs of enterprise-level hybrid cloud computing. IBM stated that it started designing the Power10 processor five years ago, incorporating hundreds of new patented technologies, claiming to be three times more energy-efficient than Shang Power9, bringing support including PCIe5.0, DDR5, and providing a single chip with 15 cores and 120 threads, With the new MemoryInception technology, it can support PB-level memory. 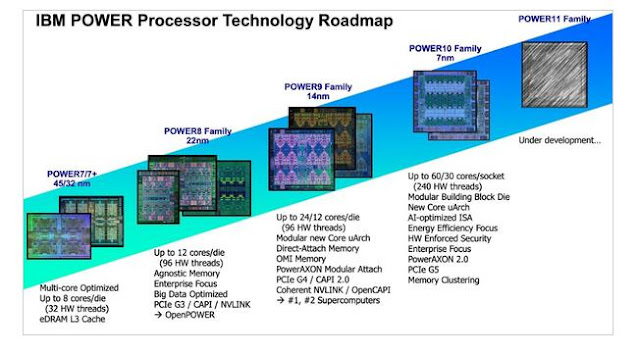 IBM only announced the Power10 product for the first time, and its specific specifications have not been announced. IBM mentioned performance comparison in the remarks. From a two-way system composed of two 30-core Power10, the new generation of Power10 series processors will have up to 30 cores. Power10 embedded matrix math accelerator (MatrixMathAccelerator), FP32, BFloat16, INT8 data format AI reasoning performance is 10 times, 15 times, 20 times that of Power9. In terms of security, it supports new hardware-based technologies, including transparent memory encryption for end-to-end security. The number of each core AES encryption engine is four times that of the previous generation Power9. It strengthens container security and provides future-oriented quantum encryption and homomorphic encryption. be prepared.
Manufacturing process, IBM upgraded from Power9’s GlobalFoundries 14nmSOI process to Samsung’s 7nmEUV process, integrating 18 billion transistors and a core area of 602mm2. Although Samsung announced mass production of the 7nmEUV process in 2018, the maturity and yield of the technology have not been well resolved. This time IBM is pushing to announce the Power10 processor. Does it mean that Samsung has completely solved the related problems In addition, Samsung 7nmEUV can be used to manufacture large-size 600mm2 chips. Can it take away some of the orders from TSMC
The Ampere GA100GPU manufactured by TSMC for NVIDIA also uses the 7nmEUV process, integrating 54 billion transistors in a core area of 826mm2, and the transistor density is much higher than that of IBM's Power series processors. But considering that the complexity of CPU transistors is much higher than that of GPUs, such a density of transistors is also explained.
The IBM server system based on the Power10 platform will be available in the second half of 2021.