August 23, 2020
Intel's 10nm process Ice Lake processors have been released, but the first batch of 10nm is mainly used in low-power platforms. The second-generation 10nm platform will be on sale in the third or fourth quarter of this year, the Tiger Lake platform announced earlier by CES.
However, recently, information about the 10nm Ice Lake server-side processor appeared in the GeekBench database. Although the specific model is not identified, the identity of the server processor can be confirmed through the "Family 6 Model 106" string. Intel 10nm server CPUs show up with strong multi-core performance 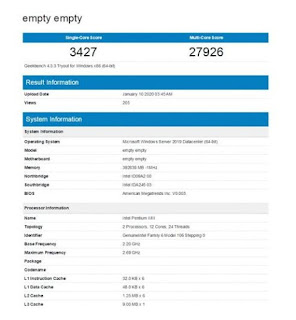 According to database information, this is a two-way platform with a total of 12 cores and 24 threads, which means that each CPU has only 6 cores and 12 threads. Relatively speaking, this is relatively rare on the server-side. After all, the server needs to complete a large number of high-load concurrent tasks, and 12 cores and 24 threads are not very sufficient. However, from the information point of view, this should be an entry-level configuration, because its base frequency is only 2.2GHz, and the core frequency is up to 2.7GHz, which is probably an engineering sample in the laboratory.
However, although the parameters of this two-way platform are relatively weak, the running score is not low. Its single-core reaches 3427 points and multi-core reaches 27926 points. The overall performance is still good, basically reaching the Cascade Lake family with 12 cores and 24 threads. The performance of Xeon W-3235. The W-3235 reference frequency is up to 3.3GHz, and the highest core frequency is up to 4.5GHz. In comparison between the two, although the single-core frequency of the 10nm server processor is much lower, the multi-core running score is 118% higher than that of the W-3235! It's incredible.