August 30, 2020
The new AMD SP3 slot is also called SoC due to its integration with traditional South Bridge chipsets such as SATA controllers. Of course, the specific motherboard design can also be used to connect the southbridge PCIe.
I'm writing this in large part because Of my March essay on "The Ideals and Realities of Going Beyond Xeon? AMD's Naples Server." At that time, the EPYC released in the past two days was not well understood, and it simply compared AMD's new-generation CPU with Intel Xeon (QPI/UPI) interconnection bandwidth and other aspects on paper. 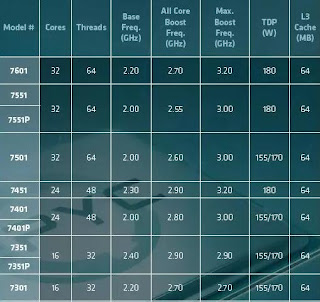 An old friend also left a message at the bottom of the article. After seeing more information today, I can finally make an answer, and further discuss the communication efficiency of EPYC processor between slots and cores, not just the Numbers on paper :) AMD PPT ulus? Is Die connection 4 or 6
In the above picture, for the convenience of the WeChat article, I have cut a part of the PPT from the foreign website, and finally I see the number description I want. The Fabric bandwidth between the four dies on one CPU (in the same slot) is 42.6GB/s per 4B (32bit width) connection. Bi-dir is calculated here, I prefer to use 21.3GB/s full-duplex.
So, the total bandwidth of the folio between the 4 DIES is 4 x 42.6≈170GB/s (85GB/s full-duplex)? The reason why I put a question mark here is that I have a question about whether To multiply by 4 or by 6. It seems reasonable to just draw the "8" shape of the AMD connector symbol, but the actual chip connector is a little inefficient if only these. I'll make a chart below and continue the discussion.
Two other sets of Numbers, by the way. First, the Fabric bandwidth across CPU slots is 37.9GB/s per 2B (16bit) connections or 18.9GB/s full-duplex. We know that in single-path servers this Fabric can be redefined as PCIe, so the rate for inter-CPU interconnection seems to be higher than the 8GT/s for PCIe 3.0.
The overall bandwidth of the folio between slots is 4 x 37.9≈152GB/s (76GB/s full-duplex). X4 is not problematic here and a clear topology diagram will follow, which I will use to discuss efficiency issues. The figure above also writes about memory bandwidth, but I won't talk about it today.
This is the architecture of the Dell PowerEdgeR830 server I used in my Series "Intel Optane P4800X SSD Review".
The main difference from the E7 is the number of QPI channels -- three per CPU has been reduced to two, so the two CPUs on the diagonal need two hops to communicate. There is an article on the network "several rounds of PK to help you select the" true four roads "! Mention that serious technology peers have found that some low-end XeonE7 four-way servers have shrunk in the motherboard design to the point that, like the Xeon E5, they only use two QPIs.
Although my discussion today is on the "film", it has something in common with the previous four ways. The following SLIDE from AMD, I think, should be the correct interconnection situation.
Look at the connection between the 4 sets of 8 core DIES, does it look like Xeon E7? Careful friends may notice that the total bandwidth of the DIe-to-die Interconnect seems to be based on 6 x 42GB/s BI-dir. So what's wrong with the previous official PowerPoint slide?
No way, I like to dig into details, the truth is not unclear. I just said that AMD's EPYC is a bit like Intel's four-way interconnect. Is this an advantage? Not of... It is understood that AMD chose to design the 8-core Die to cut and then do THE MCM package due to the limited wafer yield rate. And of course one of the things that Came to mind was that the desktop and the server would share the Die design to reduce r&d costs.
Intel Xeon Scalable Grid Interconnect replaces ring buses
There seems to be a local correspondence between Skylake's Cache and each Core. One rule of thumb: Die internal communication is generally more efficient than across Dies.
Above is a schematic of the upcoming Xeon SP (Skylake Architecture). You can see that the connections between CPU cores use a grid matrix, which is quite different from the previous ring bus. Similar architecture has been adopted on KNL code Xeon Phi, and I feel that the number of cores is still relatively efficient.
The current Intel Xeon design is shown above, and I discussed it in The back of a Xeon E5-2600 V4 test data. The 24-core design opened up to a maximum of 22 cores on V4, compared with 28 cores in the first generation of the Xeon SP.
AMD EPYC double interconnect efficiency: Bandwidth does not represent the efficiency
Before I saw this picture, I even thought about drawing it by hand. The interconnection between the two CPUs is actually achieved by four die-to-die cross-slot connections. Let's not just look at the bandwidth Numbers, because each EPYC Die is most efficient only when communicating with the Die directly connected to the other CPU slot -- a "2-hop" is required for the other three dies. This relatively complex phenomenon does not exist on the Intel platform, and there can be two QPI/UPI connections between dual xeons.
So for example, Core 1 and Core 8, which I did in red, if you had a Die and you didn't have those two red diagonal connections between them, you wouldn't have done 2 jumps, you'd have done 3 jumps.
Just kidding, I think some friends said that AMD is a PPT company, and sure enough, they compared the slot bandwidth value with Intel's existing Xeon E5 :) finally, the place to be sure is to be sure. Single-channel AMD EPYC can provide 128 lane PCIe channel, this scalability is the best, the peer friends said used to connect NVMe SSD suitably. But I also have a small question. How much CPU does 24-32 M.2/U.2 SSDS need to run together? I'm referring more to the actual application environment than to a specific Benchmark condition. Is SATA cheap if you just want the capacity?