What is the difference between server CPU and computer CPU


The term CPU is not unfamiliar to everyone. Its Chinese name is the central processing unit. In terms of physical structure, CPU mainly includes arithmetic logic components, register components and control components. The CPUs that are easier to touch in our daily lives are mobile phones and PC devices.

With the advent of the era of big data and cloud computing, the server, a logistics pacesetter, also carries more arduous network work. In the simplest terms, a server is a computer with a super performance. Its hardware composition is no different from that of a PC. It has a CPU, memory, and hard disk. The difference is that the server uses more technology and capacity on this hardware. To meet its application requirements. So, on the CPU alone, what is the difference between a server and a computer? 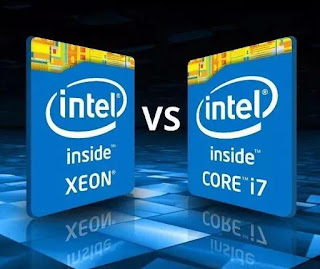 CPU: Server Xeon on the left, PC Core on the right

First of all, we first understand the CPU, whether it is a PC or a server, its performance is directly related to the CPU, and the performance of the CPU is mainly reflected in the speed of the running program. The indicators that affect the operating speed mainly include several parameters such as CPU frequency, cache, process technology and instruction system. Generally, the higher the main frequency, the faster the CPU can process data, and the more intensive the manufacturing process, the lower the CPU power consumption.

Next, let's get to know the CPU market. At present, CPU is still owned by Intel and AMD. If it is subdivided into the PC and server markets, it will be a different story.

In the PC market, AMD can still compete with Intel. Intel has the Core I series and AMD has the Ryzen series, which can be divided into high, medium and low grades. Consumers can choose flexibly according to their needs.

In the server market, Intel is the absolute hegemon, occupying more than 90% of the market share of server CPUs, and AMD is almost helpless. For the server market, Intel introduced the Xeon series of processors. Compared with the PC's Core I series, Xeon processors have better performance, stability and security. Today, Intel has focused on the scalable family of Xeon processors, named after four levels of bronze, silver, gold and platinum. Xeon E3, 5, and 7 series are also about to withdraw from the stage of history.

Having said so much about Intel and AMD, let’s go back to PCs and server CPUs. So, what is the difference between servers and PC CPUs? To put it simply and crudely, due to scenario requirements, the server's CPU performance far exceeds the PC CPU performance. It can be reflected in three aspects: stability, number of CPUs and cache.

1. Compared with PC CPU, server CPU has a better stability. Normally, the PC's CPU is designed to work continuously for 3x24 hours. When not in use, the PC is generally shut down. The server is 365 days a year, 365 days a year, which also requires the matching CPU must meet the long-term continuous work scenario.

2. The server can support multiple CPUs. On a PC, only one CPU can be installed, but on a server, two, four, or even eight CPUs can be used. For several servers that we often hear, several channels represent several CPUs.

3. The server CPU provides a three-level cache. CPU usually uses L to represent the cache level, L1 cache capacity is small, L2 is larger, and L3 cache is mainly a feature of server CPU or workstation CPU. The size of the L2 and L3 cache is also one of the main differences between the CPU models in a particular series, and the size of the cache directly affects the performance of the CPU.