Why say that server CPU is garbage? What is the difference with desktop CPU!

August 24, 2020
The server needs to be accessed by thousands of people, so this requires the server to have a large amount of data fast throughput, super stability, and long-running ability. The CPU is the brain of the computer. It is the same on the server. It is a measure of The primary indicator of server performance. At present, the CPU of a server is still distinguished by the instruction system of the CPU, which is usually divided into a CISC CPU and a RISC CPU, and a CPU with a 64-bit VLIM instruction system. 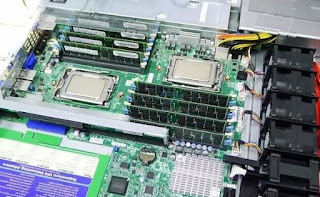 
Because of the working environment, the design of the server CPU is based on the premise that it can run in years and months as the time unit. It supports multi-channel interconnection, which means that a machine can install multiple CPUs. This operation is performed on consumer-grade CPUs. Impossible to achieve, the interface is not as single as the consumer level.
But in terms of gaming experience, server CPU is not as good as desktop CPU, because of its core frequency, overall game optimization is not as good as desktop CPU.

Used server CPU is not garbage


Due to the different working environment of server-grade CPU and consumer-grade CPU, it is mainly responsible for long-term stable work, so it is not suitable for doing consumer-grade CPU tasks. Let’s take 2650L for example, its main frequency is very low. 1.8G IOPS is 8G/s, because it is required to receive access 24 hours a day, and is generally responsible for processing simple requests such as read and write, so there are no too many requirements on clock speed, as long as the lower the frequency, the more power is saved. Very important for large data centers.

Friends who are familiar with the working principle of the CPU know that when the CPU frequency is not high enough, the complex logic calculation process may cause delays, because the CPU core needs to perform complex logic while constantly processing the internal task allocation of the game program. Calculation. For example, a 3.0GHz CPU can advance 30 meters per second, while a 1.8GHz server CPU can only advance 18 meters per second. Coupled with the low power consumption of the server CPU, a large number of vector ALUs are castrated, so entertainment The performance is naturally poor, which is why the server CPU is considered "garbage" in the conventional sense.

Can I buy a used server CPU?


Among the many CPU models of the server, the one that is closest to the performance of the consumer-grade CPU is the single-channel U, which has a low number of cores and a high frequency. It usually starts with 4 cores. Most of them are used in high-performance workstations. Now games are well optimized for multicore. Therefore, many players who have used low-frequency multi-core server U to play PC feel that the game experience is pretty good, and they are beautiful in their hearts.

The 16XX series of E5, with fewer cores and higher frequency, can be used in PC. 2670 and 2680 have their own turbo frequency, which can dynamically adjust the core frequency, which is enough for us to play most games smoothly. E5 1620 v3 /1630 v3/1660 v3 these products are quite good, and there are reliable channels to enter.
used server CPU is cost-effective, but it is not recommended for novice players to start, because it requires certain technology and channels, and the supporting platform facilities are also very backward, and the cost-effectiveness of good motherboards is very low, so this is not everyone can understand. Noob players enter with caution.