In the early morning of January 13, NVIDIA officially launched the RTX30 series of mobile graphics cards at the CES2021 exhibition. Ampere-based GPUs have also reached the mobile terminal, mainly including RTX3080, RTX3070 and RTX3060 models. 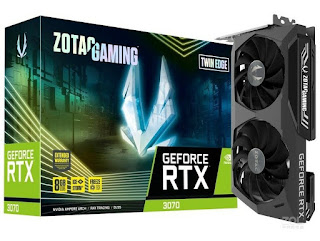 The third-generation Max-Q technology uses AI and new system optimization to make high-performance gaming laptops faster and more powerful than ever. These technologies include:

·DynamicBoost2.0: The CPU and GPU powers of traditional gaming notebooks are fixed, while games and creative applications are dynamic, and the requirements for the system will vary with the number of frames. With DynamicBoost2.0, the AI ​​network will balance and continuously optimize the power consumption of CPU, GPU, and GPU memory as needed to achieve the highest performance.

· WhisperMode2.0: WhisperMode brings a new level of voice control to the game, and it is redesigned and customized to each laptop. Once the desired mode is selected, the I algorithm of WhisperMode2.0 will manage the CPU, GPU, system temperature and fan speed to bring the best noise control performance.

· ResizableBAR: This advanced PCIExpress technology allows the CPU to access all GPU memory at one time, bringing performance improvements to many games.

To process one frame at 1440 resolution, a single GPU needs to calculate nearly 4 million pixels, while NVIDIADLSS only needs to process a small part of the pixels, thereby improving efficiency and improving performance.

The main specifications of RTX30 series mobile graphics cards are as follows:

Specific to the corresponding notebook, the details are as follows:

GeForceRTX3060 supports the latest games to turn on super settings at 1080p resolution and run at 90FPS game frames.

RTX3060 laptops start at $999, which is faster than the previous generation NVIDIA flagship GPU GeForceRTX2080SUPER laptop, which usually starts at $2,500.

GeForceRTX3080 is NVIDIA's new flagship notebook GPU. It is equipped with up to 16GB of G6 video memory. It is the world's fastest notebook designed for gamers and creators. Turn on the super setting at 1440p resolution, and the game frame rate can reach 100+FPS.

Starting from January 26th, players can buy GeForceRTX30 series notebooks from the world’s top OEMs such as Acer, Alienware, Asus, Gigabyte, HP, Lenovo, MSI, and Razer, or through Shenzhou, Machinist, and Mechanical Revolution , Raytheon and other notebook brands.